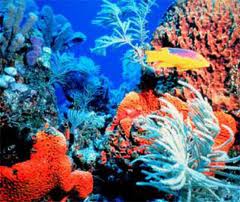 Why are fish along a coral reef more exciting than the fish you find in other waters? The coral reef and surrounding grass bottoms are the ultimate feeding ground for sea turtles and reef fish.

Reef fish look different from open water fish because their bodies are designed for a different purpose. Open water fish are typically built for speed and cruising around open waters, so they look more like bullets to minimize friction and zip along. Reef fish, on the other hand, reside in more concentrated and complex spaces of the coral, so they’re designed to dart and quickly change direction. 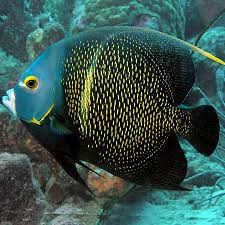 Some reef fish like angelfish and butterflyfish have bodies that are deep and laterally compressed for maximum manueverability.

A resting fish can be vulnerable to attack, so some reef fish (e.g., triggerfish) erect spines to protect themselves. The parrotfish protects itself at night from predators by belching out its own safe sleeping bubble. Sweet dreams!Reef fish survive by hiding among the coral, not by swimming out of it.

Living along the reef, some fish stay in one small area, knowing every crevice and escape route. Other reef fish may venture out and explore the reef for food, but return to the same safe place to rest. Many feed on algae that builds up on the coral and shells.

One response to “Reef Fish Rule”