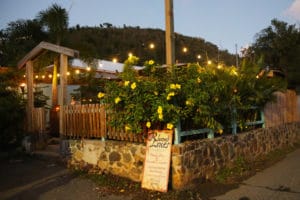 For those of you who have eaten at Rhumb Lines in Cruz Bay know how good it was and will be excited to know that they are now in Coral Bay. The owners of Indigo Grill and Rhumb Lines decided to consolidate their efforts and turn Indigo(the old Donkey Diner, formerly Sputnik) into Rhumb Lines. Delicious Asian inspired dishes are offered as pu pu portions or full dishes. Check it out when you are in Coral Bay.

Visitors and locals were shocked a few weeks ago when it was announced that Wok on the Beach was closing, like that day. A recent addition to Coral Bay, Wok on the Beach became a favorite of visitors and residents in a short amount of time. They had only been open since the storms of 2017. Bewildered lovers of Wok looked around for alternative dining while rumors circulated about what was next for the large restaurant space in the Isola Shops building (formerly Voyages). 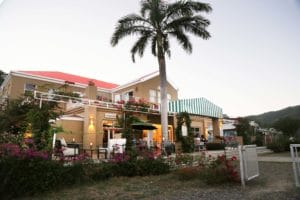 Only a few weeks passed and the former Wok had a new owner, new staff, and new menu. New name you might ask? Not yet. I guess they are still working on that since they call themselves “TBD”. Their focus has been staying open and serving people food. The prices are more reasonable than Wok and the options a little more of a traditional American palette. They have been opening for breakfast lunch and dinner. Live music plays on most nights and an unbeatable view with an ocean breeze is still the draw. Like our Facebook page to get updates on what is happening in Coral Bay and on island https://www.facebook.com/windspreevillas